Bacchus is the Roman god of wine and drunkenness, with his Greek counterpart Dionysos, he was celebrated by winemakers all over the Mediterranean region. But the biggest temple dedicated to this divinity is actually neither in Greece not Italy, it’s in Lebanon. 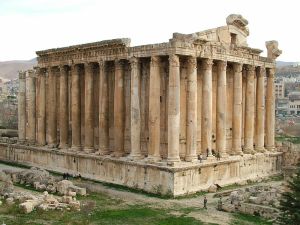 Temple of Bacchus at Baalbek

It’s located in Baalbek in the Bekaa Valley which incidentally is the heart of wine production in Lebanon (funny how that works out). The wine industry in Lebanon waned and waxed over centuries, thriving under the Greeks, and then the Romans, forbidden when Islam started dominating the region, then back in grace during the Crusades, then barely tolarated under the rule of the Ottoman Empire. It took off again during the French Protectorate in 1920 and managed to survive the Civil War of the nineties. Now it’s expanding again and more than 3000 hectares are planted.

Cabernet Sauvignon, Merlot, Carignan, Cinsault and Grenache are the more prevalent varieties. There are 3 traditional producers, Ksara, Kefraya and Musar, with Ksara accounting for roughly 70% of the total production. Today there are more and more smaller producers opening shop, many of them French expats.

3 thoughts on “Bacchus in Lebanon”