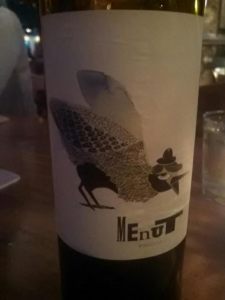 My Washington DC trip was capped with a dinner at a spectacular tapas restaurant. The food was great and the wine list was, well, extensive to say the least… There were so many references that they had to use a very small font. Anyway, to accommodate a assortment of tapas, I opted for a Priorat wine from Catalonia.

Priorat is one of these trendy up and coming appellations. It’s located in Northeastern Spain, near Barcelona. Priorat is a DOC, the highest level of appellation in Spain, with the only other DOC being Rioja. It should be noted that on Priorat bottles, it won’t read DOC but DOQ. The reason: Catalonia speaks Catalan, not Spanish (just go with it). Priorat vineyards are planted on terraced hills and the soil is a distinctive black slate and quartz composition (known as llicorella). Garnacha (Grenache) is the main variety used in Priorat wines with several other grapes being allowed,  Garnacha Peluda, Cariñena, Cabernet Sauvignon, Merlot and Syrah for red varieties and Garnacha Blanca, Macabeo, Pedro Ximénez and Chenin for white varieties.

As I mentioned earlier, this is a trendy region and as a result, the Priorat vineyard is expanding with the total planted area almost doubling in size from 1990 to 2010.

The wine is dominated by the blackcurrant notes detected on the nose. I realize that blackcurrants are not a very American fruit but for a Frenchmen they tend to be reminiscent of childhood. Blackcurrant (cassis) then and some underlying black pepper to spice things up (from the Syrah?). The finish is long with oaky notes of coffee.

Food pairings: We had it with tapas which included: crab, shrimp, cheese, sweet corn, patatas bravas and duck. As I said, it was a spectacular meal and the wine went along with everything.

Overall opinion: Trendy region but reasonable price point. It’s not the most complex wine but it’s easy to enjoy which makes is a winner in my book.