At the beginning of summer, I spent a weekend in Portland, Maine with my sidekick. For Labor Day weekend, we decided to make things symmetrical by spending 4 days in Portland, Oregon. This one is further away from Boston, but it’s got a sizable advantage, it’s right outside of Oregon wine country. Of we went then. This is our story, a story of red eye flights, food trucks, runs along the Willamette River, street art, Subaru Outbacks, ironic facial hair, craft beer, thigh tattoos, plaid shirts and pinot noir. This is the story of a long weekend, in a few parts. First up, the city itself. 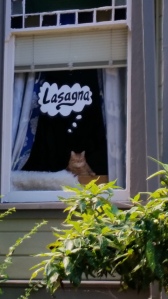 Portland is named after Portland. I mean Portland, Oregon is named after Portland Maine. The two founders of the city were from New England, from Portland and Boston to be precise. They both wanted to name their new city after their old cities. How did they settle this? How did they chose between Portland and Boston? They flipped a coin. Of course they did. Best out of three and Portland it was. You can actually see the penny they used at the Portland Historical Society. 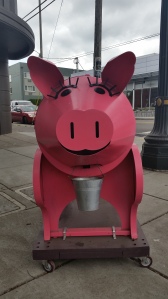 This is a happy BBQ pig

The city is parted by the Willamette Valley that runs North to South and is crisscrossed by bridges (Nickname alert: City of Bridges). It’s the most populous city in Oregon, but then again, Oregon has less than 4 million people. The main thing about Portland is that it’s weird. Intentionally weird even, the unofficial motto is “Keep Portland weird”, and portlandites do a good job of it. My vaguely preppy, non-descript appearance shouted out my non-portlandism to the world. Neither before have I felt such need for a weird mustache, a plaid shirt and a beanie. The city is the hipster capital of the US, and it shows. 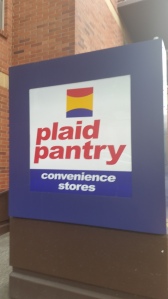 Even the stores are plaid

The hipster/hippy/granola thing is actually a good thing. First of all, it’s fun, there are a million little details that will make you chuckle as you walk around, from quirky, to cute, to funny, to just what the hell was that. Second, the food scene is fantastic! Insistence on fresh, organic, locally grown means farmers markets, gourmet grocery shops and fancy restaurants. We actually visited 3 or 4 grocery shops. I swear, they are like temples to the God of good food. Another illustration is the food truck thing. Now, many cities have those trucks, even Paris got in on that recently, but Portland is the hub. They actually have little pods, tiny villages of those trucks, with tables and all. I had an awesome wood fire pizza at one of them. It haunts me. 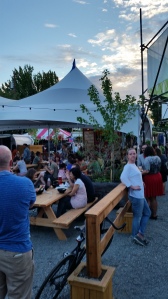 Last, but not least, Portland, or PDX as the local call it everywhere, has the highest number of microbreweries of any city in the US. We sampled a few, Burnside (excellent), Deschutes (decent). Rogue (very good) and Cascade (original, because the brew almost exclusively sour beers). We went for the beer flights at all of these and there was much rejoicing. 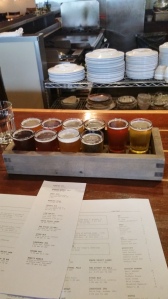 Beer flight at the Burnside Brewery

That’s it for the city, next time, we dive into the Willamette Valley wine country.