As my friend Laurie continues to work towards her WSET diploma, we, her friends, get treated to wine tasting dinners with some good quality stuff, anything to help a friend study, self-sacrifice and all… Case in point, last week, our tasting line-up included: 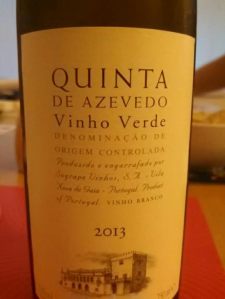 A Pinot Noir from New Zealand, very jammy, lots of cooked or jammy fruit notes (prunes, plums, cherries). I’m not a fan of this overripe style of Pinot. It must be my (cold and calculating) Burgundian side and ancestry protesting this use of OUR grape.

Another Pinot Noir, this time for California. Surprisingly more subdued than the NZ example above. The fruit notes were still ripe but not cooked. A well-made wine. 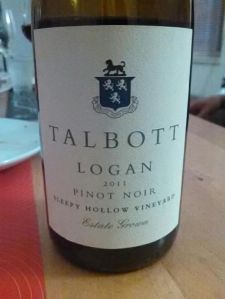 Now this last wine deserves a proper write up. Even though the label is in French “Grande Reserve” this is actually Greek wine. 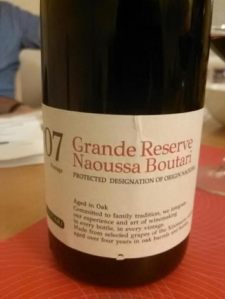 Now, I get that Greece is not necessarily considered a major wine producing nation, when people thing of European wine countries it usually goes: France, Italy, Germany, Spain.  Greece has both a past and a future in wine-making though. The past part is obvious, most of European culture emerged from Greek civilization and its later appropriation by the Romans, which includes wine-making. Now for the future part, Greek wines have started to be recognized by critics lately and they are now considered quality products.

Boutari is one of the main, if not the main Greek wine producer. The Naoussa appellation is located in Northern Greece, in the region of Macedonia. Not the country Macedonia, but the Macedonia region of Greece, because, of course let’s try not to confuse people. The appellation includes 9 villages, including Naoussa which gives its name to the whole appellation.

Naoussa is a single variety appellation with only xinomavro vines being planted. Xinomavro or Ξινόμαυρο (I couldn’t resist putting it in Greek, I’m a language nerd), it’s a native Greek variety that is often compared to Pinot Noir (light color, tendency to become brownish with age, high acidity) or Nebbiolo (strong tannins, angular structure, ageing potential). You’ll have to admit, there are worse comparisons.

The thing is, those comparisons are what they are and surely they can point you in the right directions if you’ve never had xinomavro before, but, in my opinion, xinomavro is very much its own thing. I had two different wines from Naoussa and both were among the most unique wines I ever tasted. They have all they need in terms of body, structure and tannins, but they tend to be on the funkier side in terms of aromas: caramel, liquorice, herbs and olives…

If you can get your hands on some, and I think Boutari wines are fairly well distributed in the US, I definitely recommend going for it. They are well made wines with ageing potential and they will broaden your horizons. At the very least, you’ll remember tasting them, there is nothing quite like it.